A while back during some of my semi-bored internet surfing looking for stuff similar to the animated Heavy Metal movie (we all revisit that phase every once and a while), I came across talk about a movie that was 'inspired' and 'is the original' in the line of fantasy post-apocalyptic animated movies. This move was referred to as 'Wizards' by Ralph Bakshi, and a number of anonymous gamers and rpg-folks felt that it was a seminal film of that genre. 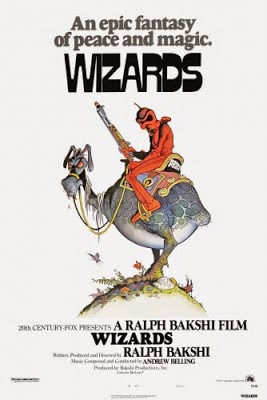 Now, I had never seen this movie. And as a person with a high level of self-importance and good amount of know-it-all-ism, I felt a bit of shame at that realization. I decided I needed to rectify that situation in case I'm ever at a party with Frank Mentzer and Joss Whedon and they randomly strike up a conversation about how they both love this mysterious 'fantasy-animation-origin' film I'm hearing about and I need a way to cut myself into their conversation. So I searched for an online version with Netflix and Amazon, but had no luck. Finally I just decided to take a chance and ordered the blu-ray of it, figuring it probably deserves a place next to Heavy Metal and Fire and Ice in my blu-ray collection if its so important.

So, how was it? ...Well, I watched the whole thing, so that's something I guess.

I'm going to be straight with you: Its not great. Its...weird, for sure, but that isn't what made it hard to watch. I mean, Zardoz is weird, so I know like that kind of weird. But this movie is just...I mean, its one of those films where you don't hate it, but it makes you wonder: "How did this ever get made? Who would put money into this? What the hell were they really smoking in the 70's?" Keep in mind this was the same year in which Star Wars was released, so its not like it was a bad year for movies or something.

First off, the art is wildly different throughout the film. Its like they had seven different animators working on the film, and two of those seven animators were awesome artists. The other five were interns they hired away from the Schoolhouse Rock set. The best art in the movie, by far, were the still pieces they used as backgrounds. They looked fantastic, and totally in line with a Frank Frazetta art-vibe. The character animation, on the other hand, changed dramatically from scene to scene. Not like Heavy Metal, where different artists do different stories so its a self-contained deal. No, its more like they just had ideas for three movies and worked on all of them at once. I'm sure that can be explained by an attempt to make each scene or faction have a different animation vibe, but it just looks...I don't know. Half-assed? You can tell I'm trying not to bad-mouth a movie that was presented to me as some sort of Classic, but for the love of Pete I don't see why this movie was so loved by my so many of my fellow nerdfolk.
Now, it starts out okay. Its got this narrator lady that talks forever at the beginning, with far more information than you need. She only needs get across three concepts: 1) War is bad, 2) Technology and Magic lovers don't see eye to eye, and 3) Two magic twins were born to a fairy princess who are exact opposites (one good, one evil). But it takes like fifteen minutes to go through this and its just showing you still pictures the whole time talking about gnome villagers having a party you have no need to know about. Its way too long of an opening. But maybe people in the 70's had more time on their hands, who knows.
After the extended narration, though, it gets into this sweet post-apocalyptic vibe, and introduces an assassin (sent out by the Evil twin) named Necron-99 who carries an assault rifle and rides an egg-shaped lizard-beast, which I was totally down with. He shoots the shit out of gnomes and orphans and whatnot as he rides around stamping out believers of 'Nature Magic.' Its pretty awesome. So, really, here's where my hopes start to build up. It does this for a good five or six minutes, teasing you. I'm guessing this was the segment of film they showed to investors to originally get funding.

Then it cuts to the 'Good twin' and his team and the movie just gets...dumb. I'm sorry, but its a terrible way to spread their message of... peace? Or maybe free love? Or, like, reincarnation? Look, I'm not really sure. I know they definitely dislike Hitler, because this movie shows reels and reels of actual Hitler footage. Its like standing in the park watching a bunch of drugged-out performance artists' try to paint out their combined-message of anti-war/vegetarianism/gluten-free-love/communism on the sidewalk using fur coats and pigs blood. While they smoke cigarettes and hurl insults at you.

I mean, yeah, there's like, nips and boobs everywhere, and occasionally dudes get shot a hundred times, but it still doesn't help. Even with all the sex and violence its just flat boring. I'm sorry. I wanted to like Necron-99 and make references to him in my future D&D games, but I just don't think that'll ever happen after seeing the whole film.
Look, if you're a fan of this movie and are sure that I'm missing the fantastic artistry behind it, well then that's great, but I can't in good conscience recommend this mish-mash of an animated film to anyone. If I met someone who'd never seen an animated Frazetta-style Sword-and-Sorcery film, and I wanted them to hate the genre from the get-go, I'd show them this film first. Sorry.